Trend Alert- Your Next Fitness Class Will Be Voga ... 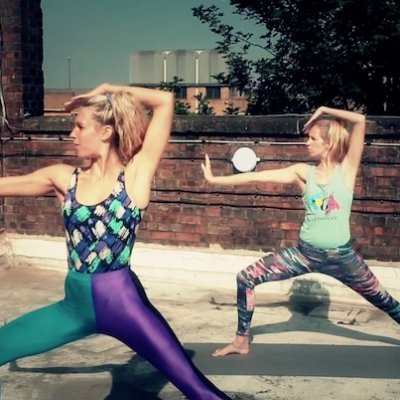 Have you heard the buzz about voga? Or not heard about it at all? Either way, I’ve got the information you need. Take heed because it could be your next fitness regime. Voga is being tipped to be one of the hot fitness trends in 2016.

1 It’s a Combination of Yoga and Vogueing

Yoga, most people know, involves stretching and breath synchronization, and is often performed in slow, elegant, controlled movements. But the reason why Voga will be big in 2016 is because it combines this disciplined approach with the fun of Vogueing-that dance craze from the ‘80s introduced to the mainstream audience by Madonna. Vogueing involves striking dramatic and expressive poses, which resemble some of the physical alignment involved in yoga.

2 It Was Created by Film Industry Art Director

The whole idea of combining yoga and vogueing came about because former art director Juliet Murrell, who worked celebrities like Johnny Depp, wanted to find a way to get a cardio workout while performing yoga moves. She became interested when doing research in India, where she took an intensive course and began teaching toga full time. After watching, “Paris is Burning,” she saw how similar the dance moves were to yoga moves, and Voga was born.

People who practice Voga want to get the benefits of yoga plus the cardio of dancing. Voga allows you to do this without losing focus. Even people who are used to workouts like Pilates will find this workout, with all its flexing and movement, a challenge. Voga offers a unique series of poses and counter postures that exercise every part of the body, even the hands and feet. The workout will seem to go by so fast, you may not realize you just spent an hour exercising-until the next day, anyway.

4 It Uses an Amazing Soundtrack

Alex Gromadzki is responsible for the upbeat and energetic soundtrack played at Voga sessions. The tracks are pulled from the dance club scene from the 1980s when vogueing was popular, so the sound is very authentic. He assembles his soundtracks from the vintage sounds of the 80s, with its strong dance beats and rhythmic style, and includes major artists like Prince, Madonna, Diana Ross, and Janet Jackson. The energetic beats and fun, carefree music will have your feet moving before you even begin your Voga session.

If you like your workouts to be energetic and fun, and are already a fan of workouts like Zumba or other dance-fitness classes, this is the workout for you. One common complaint about Yoga is that it can be somewhat boring, but Voga is anything but boring. The music makes you want to jump to your feet and get moving. It’s even more fun if you embrace the 80s scenario by donning your bright green leggings, leg warmers, and leotards with the ultra high leg openings. Oh, and don’t forget to wear your big hair in a scrunchie.

6 You Relax Better by Concentrating on Movement

In many yoga classes, you are asked to concentrate on your breathing and told to relax. Sometimes focusing on breathing only invites your mind to wander, and being told to relax isn’t doing anything to actually help you relax and may cause more stress. In Voga, you concentrate on movement, something outside the mind, so you can actually get outside of all those thoughts whizzing around in your head.

7 It Will Be in Your Town Soon!

Right now, Voga is mostly concentrated in the London area. The founder, Juliet Murrell, plans on taking the idea all over the world and began that expansion in the UK. Other plans include Rio de Janeiro and Buenos Aires, as well as other hot spots in South America. Demonstrations and Voga tours are scheduled around Europe, and should touch down in the U.S. in New York.

This sounds great. Is it something you’d try?